Many people that owned businesses that were ruined by RBS have often asked why they were targeted.  Today we have the evidence.  The Government failed to get us the evidence.  The FCA actively hid the evidence from us.  The Courts ruled that most of the evidence is privileged because Clifford Chance solicitors either took the notes or were present, meaning that an attorney-client confidentiality issue arose and anything contained in notes of those meetings is no longer able to be disclosed during litigation.  Despite all of those obstacles annihilating any chance a business may possibly have of bringing a claim against RBS – the dump of documents noted below may actually have gone in favour of the customer for once.  The FCA must be furious.

On 10 October 2016 Heidi Blake, the lead investigatory journalist at Buzz Feed, released a cache of 16,000 GRG documents.  We know that two things happened in GRG as a result.  One was the Blue Peter Appeal sheet along with a covering email entitled “Dash For Cash” (RBS was indeed that desperate that ruining a 20 year relationship with a customer went down to a dash for cash under the fun title of “Blue Peter Appeal”).

The other was the mandatory reasons for moving you to GRG.  As was outlined in the Property Alliance Group v RBS case, if a business has threatened litigation or is indeed litigating a case against RBS that customer was mandatorily moved to GRG

[1]
.  It made absolutely no difference what your business was like, RBS wanted you in GRG so they could, presumably, remove your cash flow making litigation either very difficult or impossible.  It was designed to wreck your business and, presumably, to stop your claim against the Bank.  It is important that you appreciate the wording on this page.

It is a mandatory transfer to GRG.  The other panels are mandatory “referral” to GRG.  Where a business is referred to GRG the Watch Committee made up of senior executives at RBS Group, would decide what happens to a business.  They could be watched.  They could be asked for further information.  They could have asked you to sell assets.  But if you come under the mandatory transfer, that is the end of your business as you know it.  GRG intended to charge you fees (including Property Participation Fee Agreements), charge you a percentage of business (by taking preferential shares for West Register), forced you to sell your assets, call in loans and even remove directors.  The Dash for Cash at RBS was simply a naked way of creating cash that the Bank was not entitled to.  Transferring you to GRG if you sued RBS was nothing short of naked retribution. 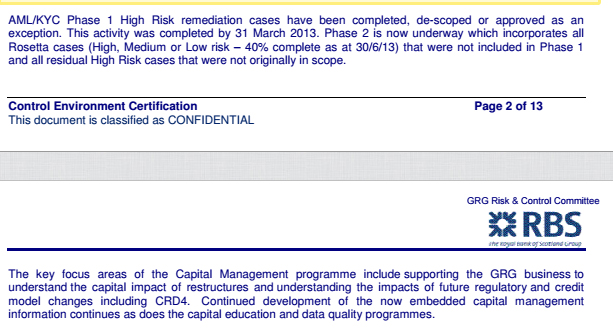 A key 2013 document[2] sets out that all businesses that were within the scope of the FCA’s investigation into the selling of Interest rate Hedging Products were all considered for GRG.  This was known as Project Rossetta[3].  Having worked on IRHP cases since 2010 I can confirm that I have only ever come across one case that was within the FCA review that was not in GRG.  I had two, but GRG jumped in on one of them in late 2013.  This documents appears to show what I have always thought: if you had an Interest Rate Hedging Product you going to be moved into GRG so that they could earn additional fees by not only restructuring your loans but also by restructuring your IRHP product.  It worked.  They made a fortune out of restructuring IRHPs and it damaged businesses.  They also often only gave an alternative hedging arrangement as redress in the FCA review – and the FCA allowed RBS to do this.  RBS paid out a fraction of damages in the FCA than it ought to have done by forcing alternative hedges as re4dress.  Despite most practitioners that work in this area knowing that this was done for the sole purpose of minimising damages paid out, the FCA ignored it and allowed RBS to continue. When everyone asked for a review of the review – because some cases were that transparent – the FCA demurred, said no, said maybe and did nothing.  RBS got away with it. 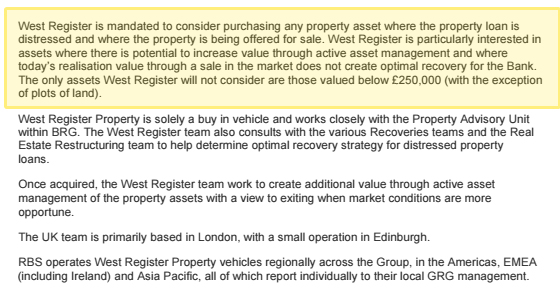 And, finally, as has been set out many times, West Register was used to buy customers’ properties off them for knock down prices, then impose Property Participation Fee Agreements and priority shares into GRG customers’ businesses[4].  The West Register Companies (and there are a lot of them) made all of their money from GRG customers.  If you go and look at the accounts registered at Companies’ House, you will see the eye watering figures.  As set out by me previously, PPFAs and shares brought in seven and eight digit numbers.  Every single penny of the hundreds of millions of pounds taken in GRG all came from a business that had gone through the worst economic collapse in memory and were then doubly damaged by GRG greedily taking as much cash as they could without actually killing off the business.  HBOS and Lloyds did a similar thing to their customers, but instead of keeping them, they sold their customers off to Cerberus..

If you want to read West Register’s 2012 manual, you now can[5].  If you want to know their policy & procedure in April 2011, you can[6].  All of this should have been in the FCA’s s. 166 report.  The FCA appears not to want to release that report.  This document dump by Buzz Feed circumvents the FCA and allows businesses to do their own report.

The FCA issued an investigation into GRG.  It appeared as though the FCA was looking to stop RBS customers from gaining a litigation advantage by using the report.  It is too late now.  This dump of documents will be used by every RBS GRG customer in their claims.  Who-ever gave these documents to Buzz Feed should be proud of themselves.  RBS went on a huge Blue Peter Appeal in their dash for cash.  Now there will be a huge dash for the Courtroom now that RBS’s dirty secrets have been laid out for all to see.